The Hilton Garden Inn Mission Valley/Stadium is an upgraded and improved hotel and features modern décor and a contemporary style. All of the guest rooms and suites come with Free Wi-Fi, useful amenities and advanced tech for a comfortable stay. The hotel is ideally situated near SDCCU Stadium, just off the I-15 and near the I-8 freeways, which puts you and your family close to all of the most popular attractions of San Diego. It is a 0.8 miles walk from the hotel to the Osteopathic Center of San Diego.

San Diego is renowned for its idyllic climate, 70 miles of pristine beaches and a dazzling array of world-class family attractions. Popular attractions include the world-famous San Diego Zoo and Safari Park, Sea World San Diego and LEGOLAND California. San Diego offers an expansive variety of things to see and do, appealing to guests of all ages from around the world.

In San Diego’s East County, the terrain varies from gentle foothills to mile-high mountains and the historic mining town, Julian, down to the 600,000-acre Anza Borrego Desert State Park, offering nature-conscious visitors endless opportunities to hike, camp, fish, observe wildlife and much more. In San Diego’s North County, the agricultural community produces significant quantities of flowers and magnificent produce. Wine growers are also making a mark by growing and harvesting quality grapes that become excellent wines, which are served at some of the most elegant restaurants and resorts in the region. Along the west, 70 miles of Pacific Ocean coastline not only supports year-round outdoor recreation, such as surfing, boating, sailing and swimming, but also important scientific research at the Scripps Institution of Oceanography. To the south, it’s a whole different country, Mexico, featuring its own cultural offerings in various towns along the border and coastline, including Tijuana, Rosarito and Ensenada. 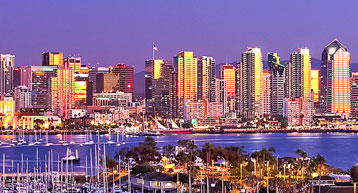 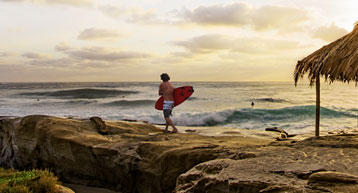